Battle Row Campground is located on the east side of Round Swamp Road in Bethpage, just west of the Nassau-Suffolk border. The Motor Parkway ran east and west inside the campground and turned north, crossing Bethpage-Sweethollow Road on the eastern side of the campground. Further east, this road turns into Spagnoli Raod which is featured on another page in this site.

The following two maps show the Motor Parkway and the area before and after the creation of the campground. The Motor Parkway, shown as blue text on the map on the left, is where the roadway crossed Round Swamp Road into today's Battle Row Campground. Following along Sweethollow Road, it ran through the northern edge of the campground and then crossed Sweethollow and ran along the southern border of the current Old Bethpage Restoration Village. Note the historical significance of some street names on the west side of Round Swamp Road, directly south of its intersection with Bethpage-Sweethollow Road. Check out Vanderbilt, Motor Lane and Toll Place (or perhaps Plaza).

The map on the right is a Hagstrom map from the late 40s or early 50s. Battle Row is on the lower right hand side going east/west with the Motor Parkway highlighted in blue. Today's Battle Row Campground appears to occupy the confines of the Post Brick Co., in the middle of the map where the Motor Parkway turns north. Following the Motor Parkway, one can see it crossing Claremont Street, which intersects with Bethpage-Sweethollow Road. At that point, the Parkway runs close to the border of today's Old Bethpage Restoration Village. Comparing this map with the previous map is a very interesting exercise. Start by imagining where the noted Vanderbilt road, Motor Lane and Toll Place on the previous map would lie on this one. Also, this map doesn't appear to have the east/west Bethpage-Sweethollow Road that runs north of Battle Row and intersects with Round Swamp Road. 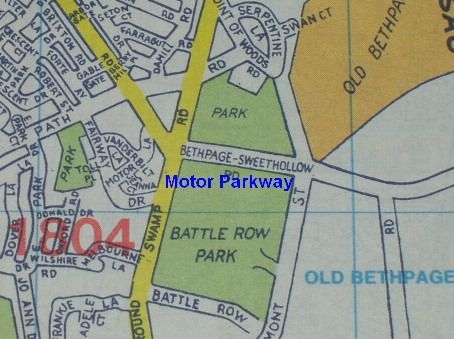 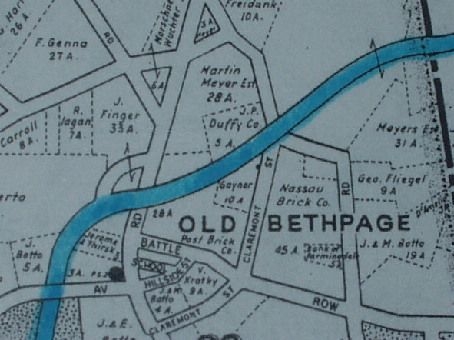 Below is a map from 1968 still showing parts of the Motor Parkway ("Old Motor Parkway") before entering Battle Row campground (campground not actually shown) and after it crossed Bethpage - Sweet Hollow Road. The full map depicts the Plainview Fire Protection District, first having been produced in 1954, but updated every year or so. North of the Motor Parkway on the right side is the Old Bethpage Restoration Village.

The pictures that follow on this page were taken in the spring of 2009 starting with one showing a path leading up the east side of Round Swamp Road where the Motor Parkway entered the area that is now the campground. You can see the roadway at the top of the path. The next set of pictures were taken from the east side of Round Swamp Road up the path facing west, looking across Round Swamp. The building on the other side of Round Swamp is a firehouse whose parking area and grass on the right is the parkway roadway. A thank you must be given to a dedicated group of Friends of the Motor Parkway who had recently cleaned the area and made it easy to navigate. 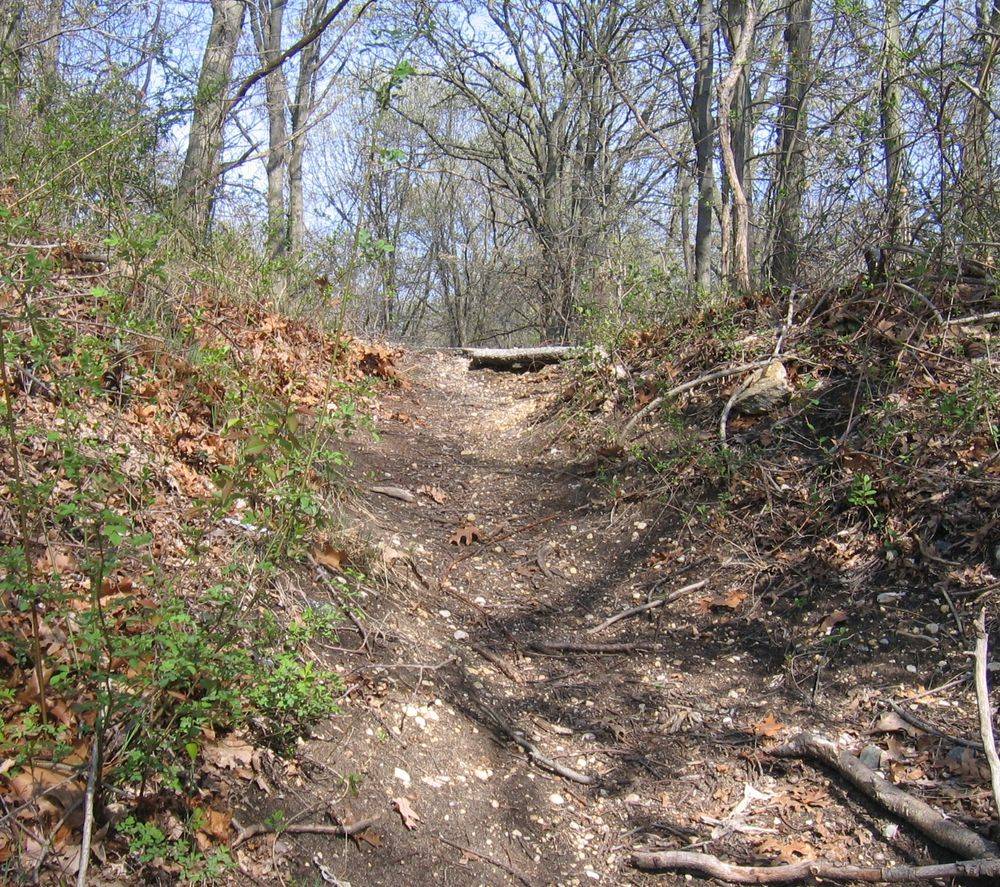 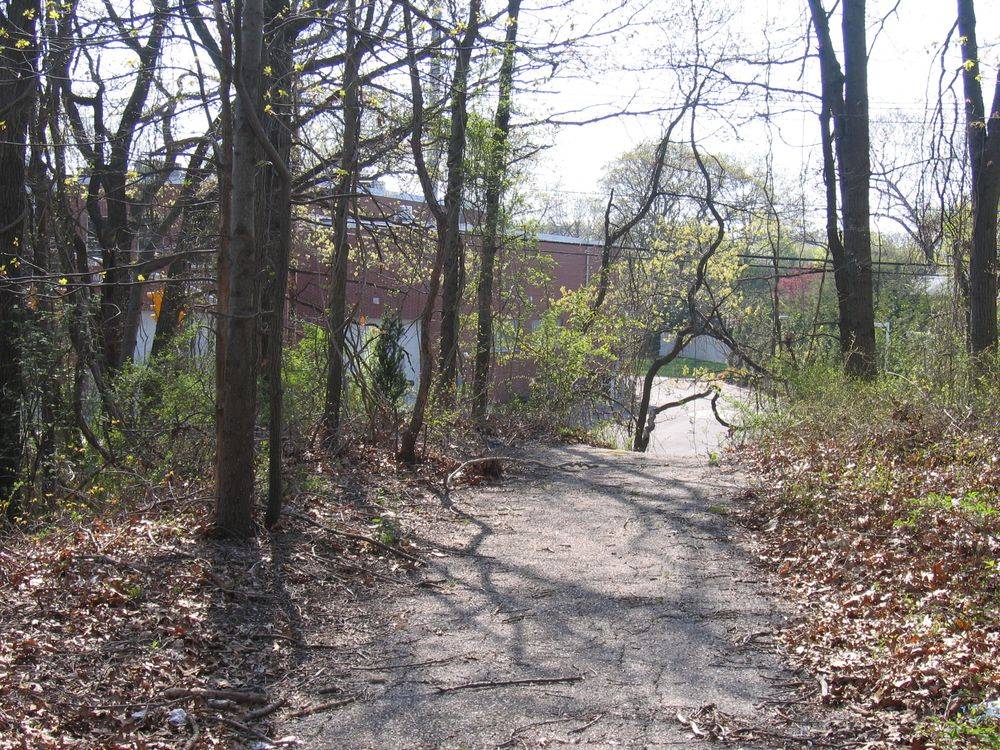 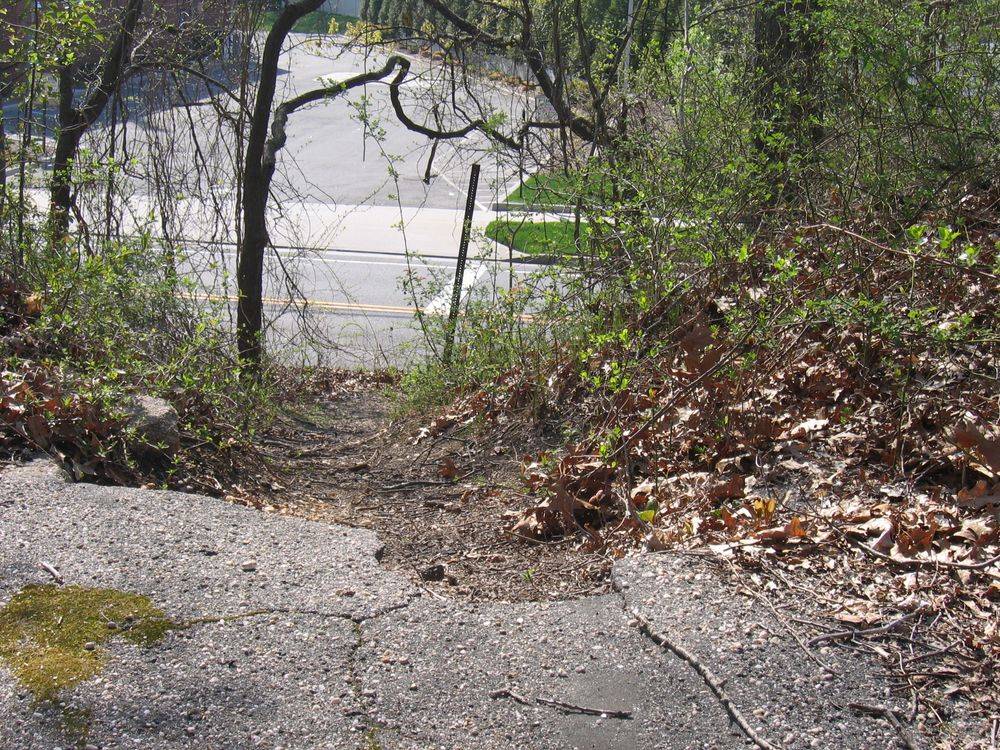 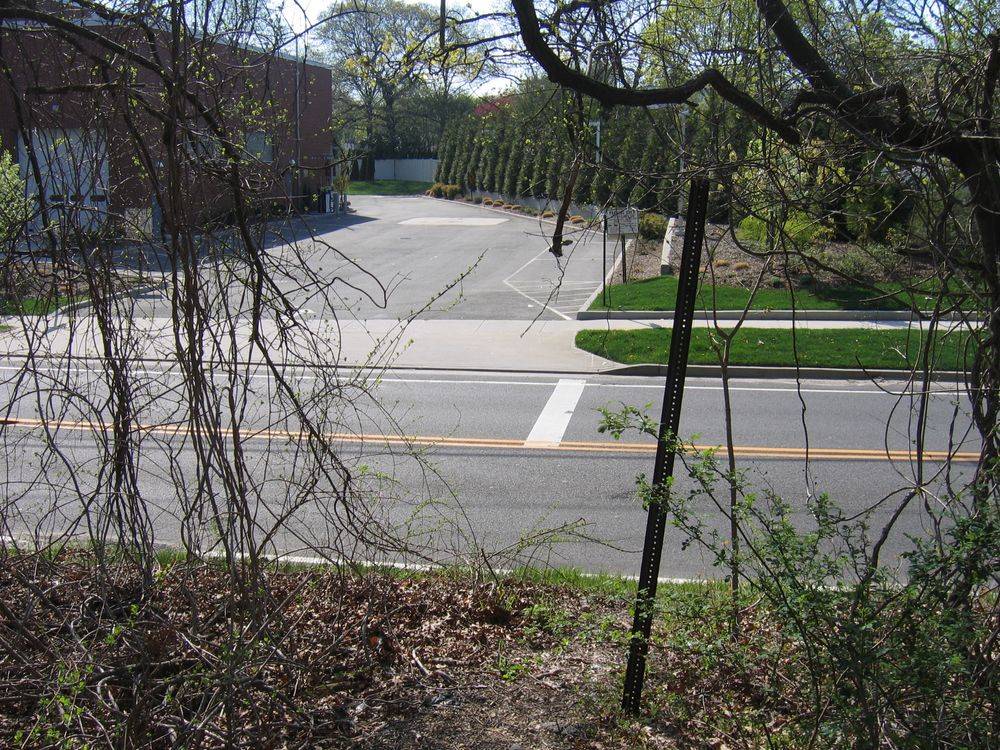 The pictures that follow show the roadway heading east into the campgrounds. A brick wall was erected after the parkway closed, however posts are still found on either side. The second and third pics show posts on either side of the wall. 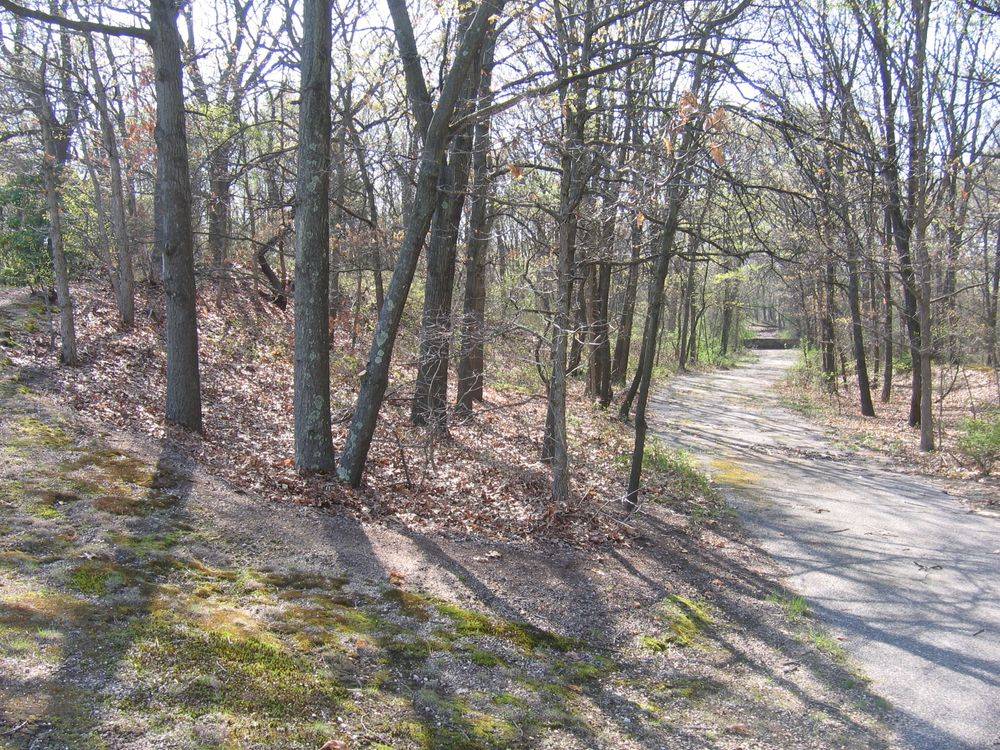 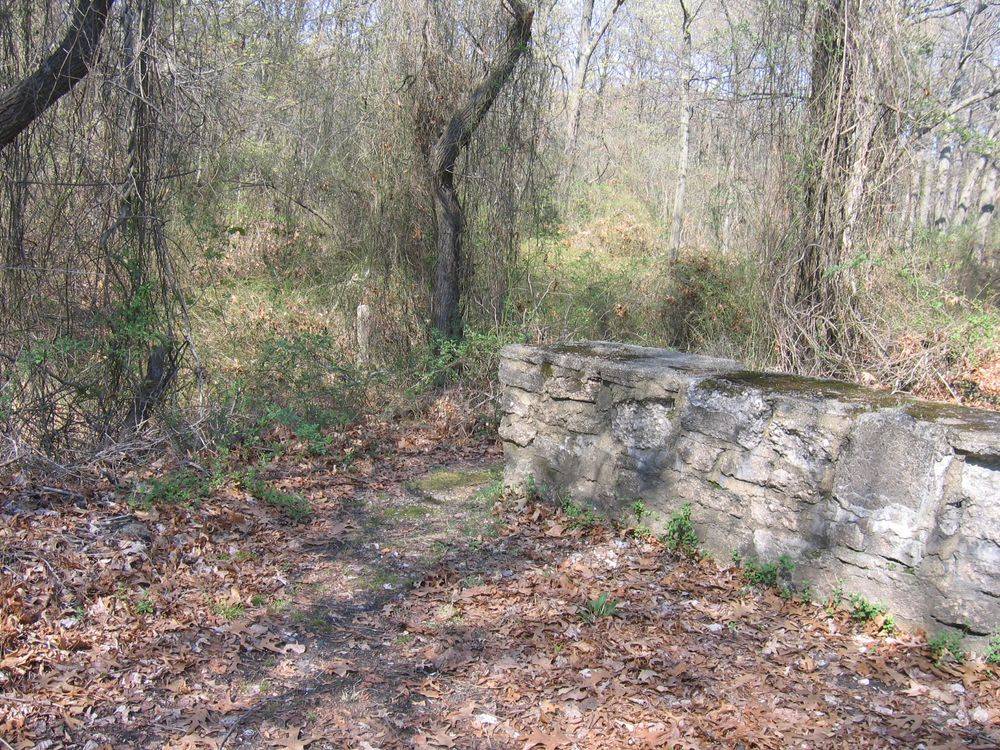 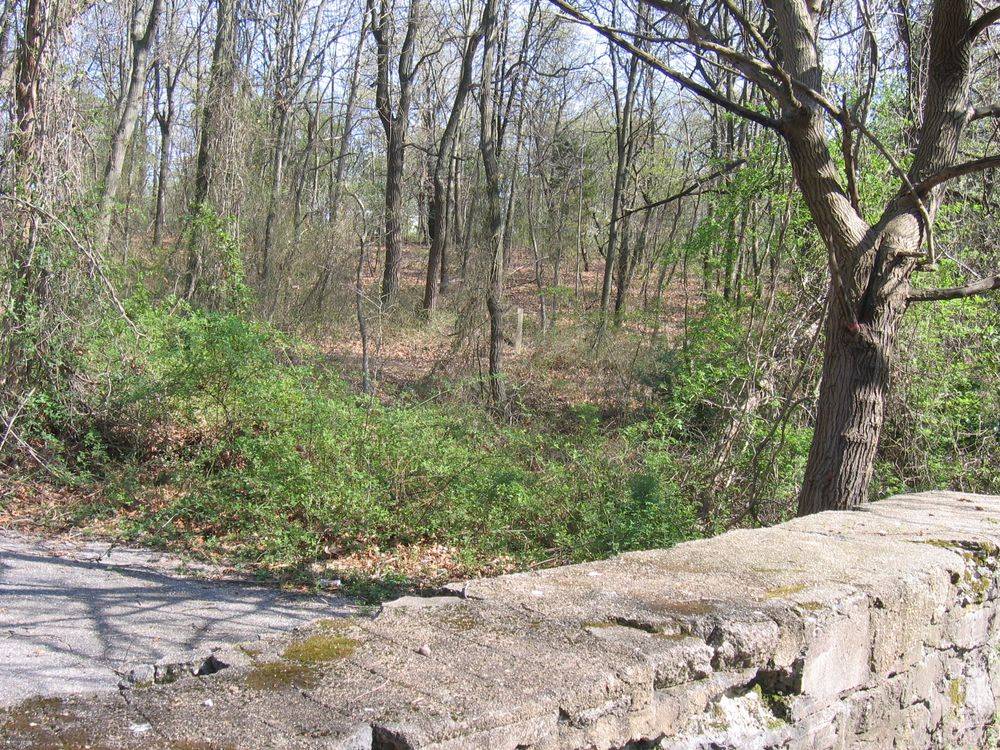 More posts as you look deeper into the campground and away from the roadway. 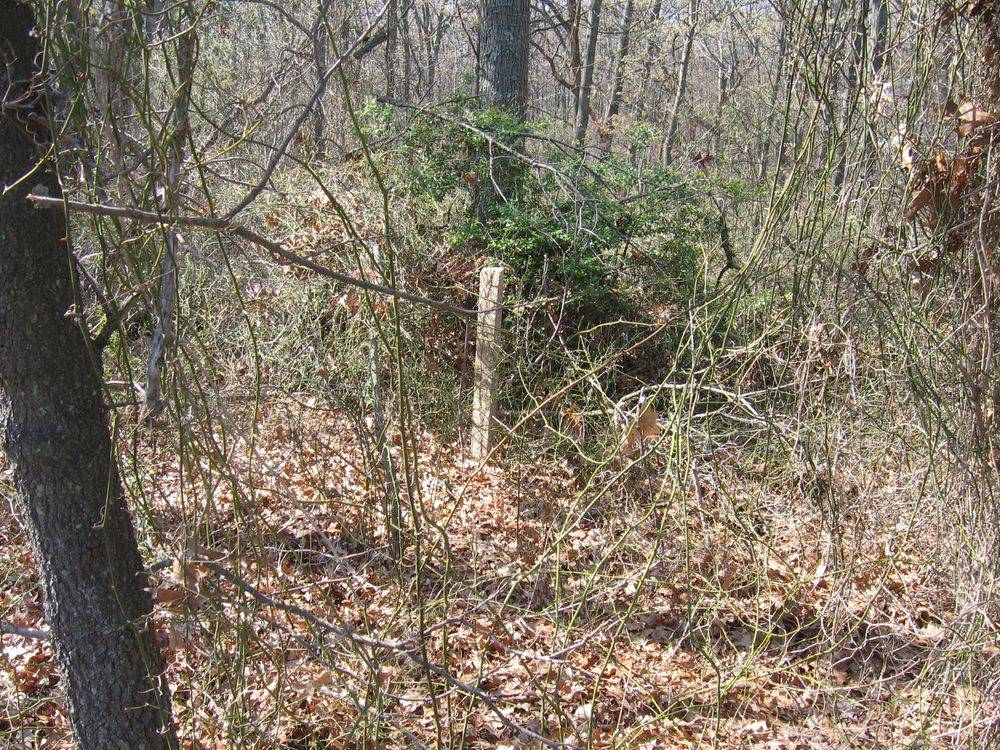 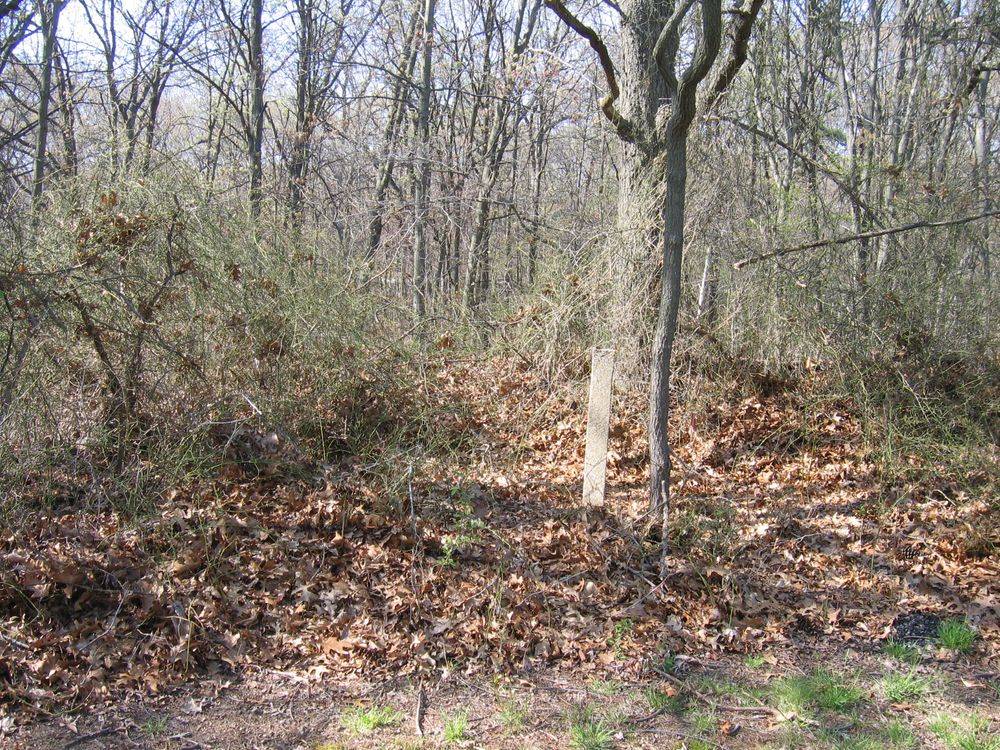 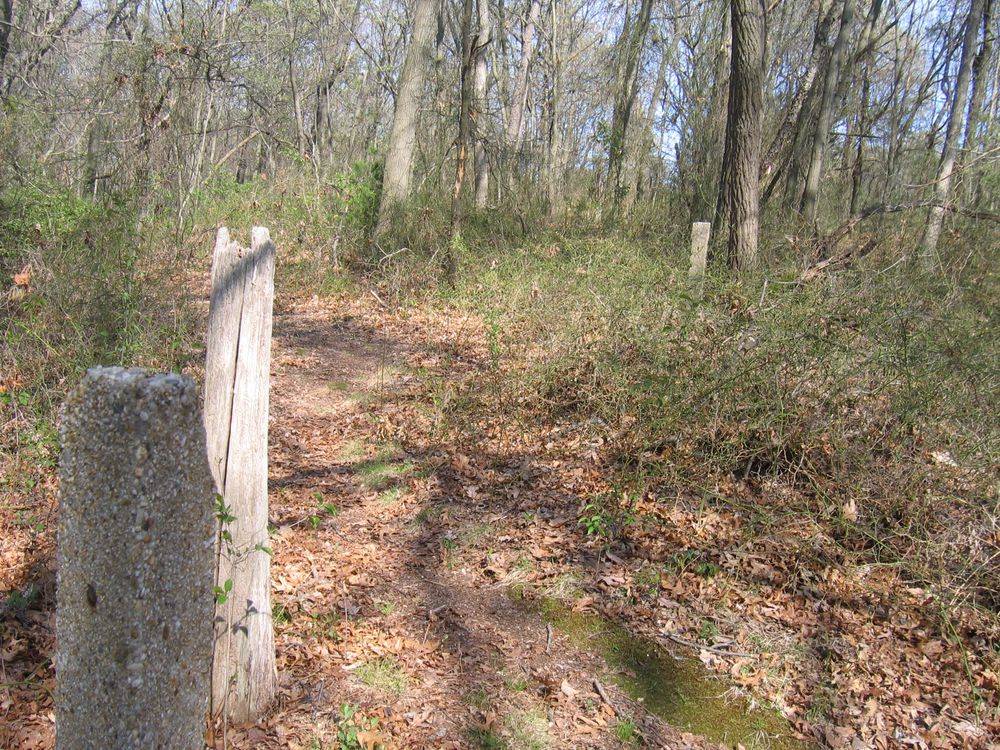 The hills shown on the next two pictures show the embankment of the Motor Parkway as it headed through what is today Battle Row Campground. And the last picture shows a post very close to where the RVs and trailers park for the night. I bet that most of the people that spend the night do not know the significance of the post. Perhaps one day a marker could be erected indicating such. 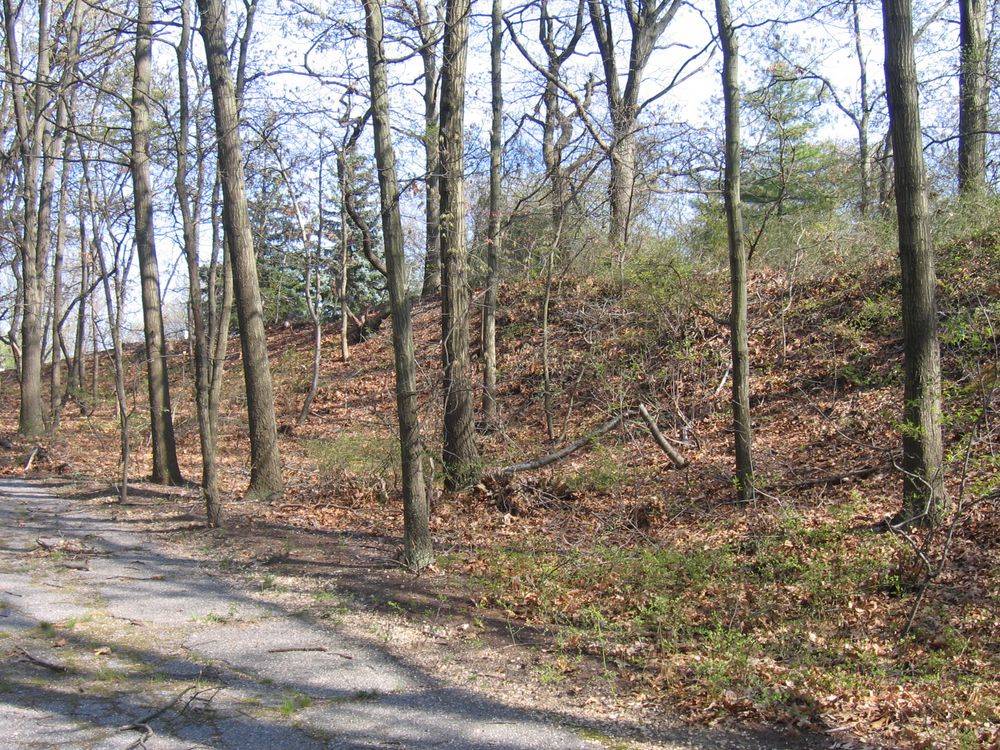 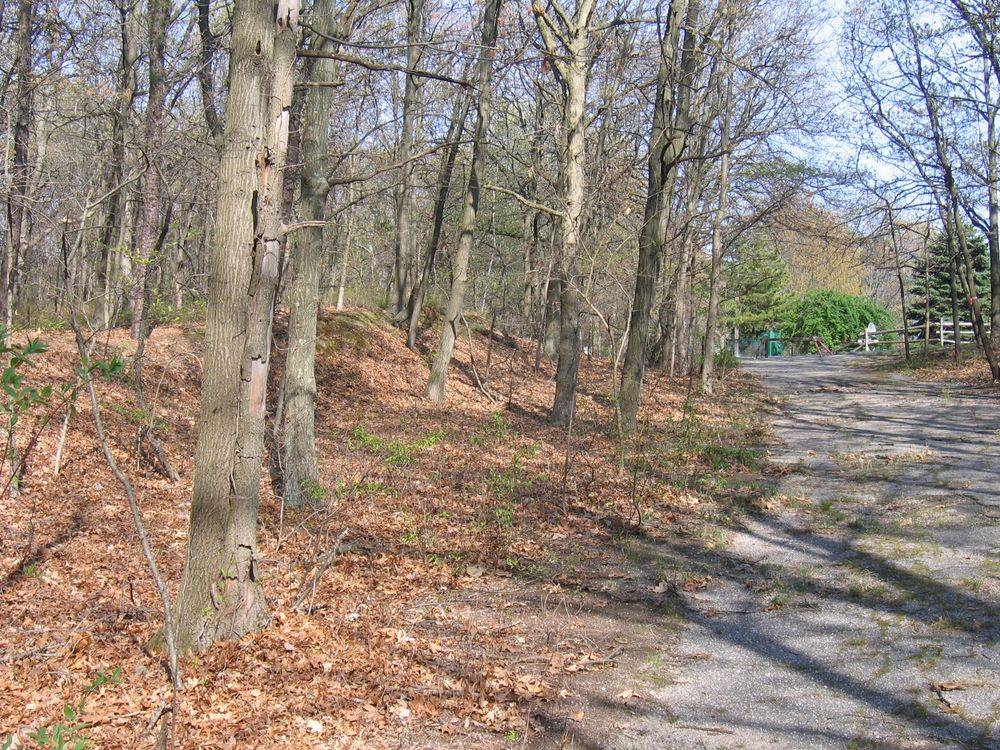 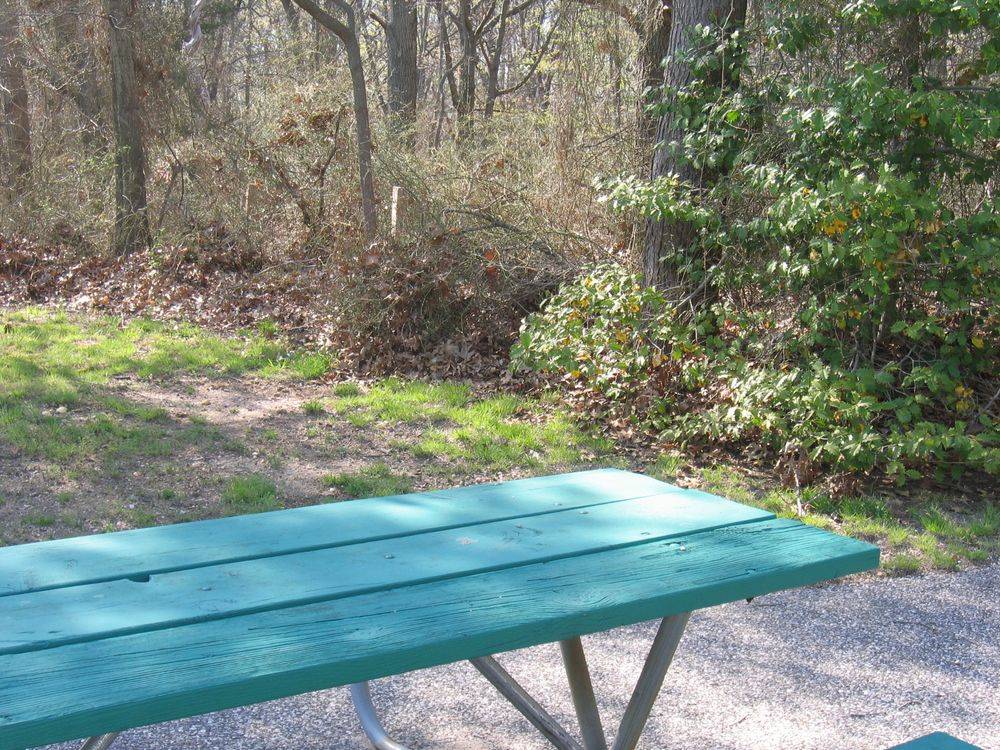 These pictures were taken on my first trip to the campground area in the summer of 2003. The ridge shown here could be an indication of the Motor Parkway on the northern edge of the campground's property, looking east from the south side of Bethpage-Sweethollow Road. These pictures are east of the previous ones and border the woods along Sweethollow Road. Just so you know, my bicycle made it up and over the woods and into the campground. At that point, the campground's official noticed me and very pleasantly assisted me in my journey to find Motor Parkway posts, which he helped locate as he knew where some were. I also found a piece of possible roadway among the brush, but am not certain that it actually is. 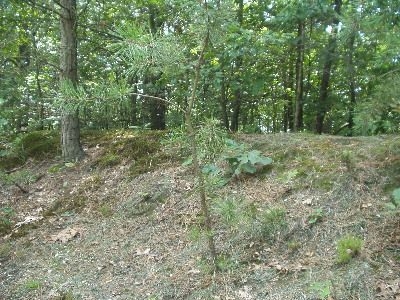 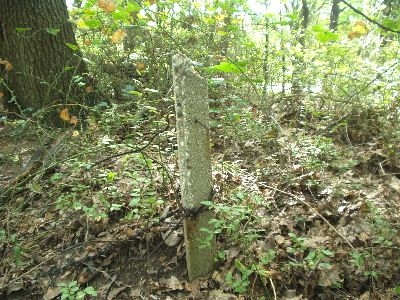 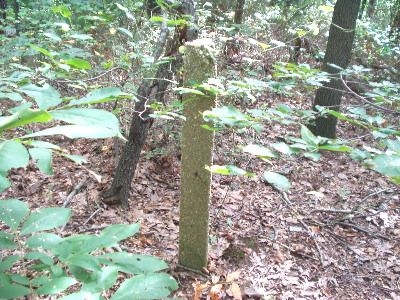 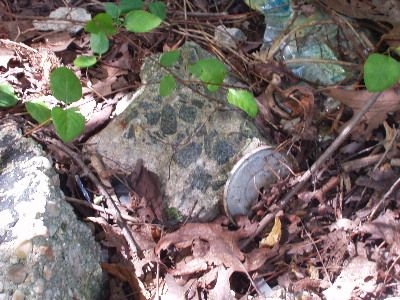