Spring is almost here on Long Island (April, 2007) and its time to get back to exploring the route of The Motor Parkway. This page details a walking adventure I took along the western side of today's Seaford Oyster Bay Expressway (SOB) which runs north and south and wasn't built until way after the 1938 close of the Motor Parkway. The Parkway ran parrallel to the SOB from Dead Man's Curve (see previous pages and map below) to a point north of Powell Avenue and then turned east through what is today Bethpage State Park.

The map shows the Parkway heading east into Dead Man's Curve at the bottom left, then north crossing Powell Avenue and then crossing Plainview Road and heading east into Bethpage State Park. Today's SOB would be directly adjacent to the Motor Parkway property. The blue dot at the end of Caroline Street (right where the word "Motor" is) is where I came across a series of 10 posts, very close to one another. BUT GETTING TO THESE POSTS WAS NOT EASY.

I entered the area north of Powell Road behind an elementary school on the east side of Broadway (shown as Union Free School District 21). There I encountered thick bushes, thorns, assorted litter and a fairly large sump (see picture below). The sump was part water (with some nice fowl present) and part sludge. Walking south, I passed the ends of a few streets that are now on what used to be the J. Botto property and then past Ellen and Dorothy Streets. Having encountered difficult terrain, I was becoming a bit despondent at not finding Motor Parkway "stuff" that would make by journey worthwhile. I was also getting a bit nervous that I would not find a way out of the bushes except for the way I entered. Well, lo and behold at a point just north of the end of Caoline Street, with a backyard fence as a backdrop, there they were - posts.

A series of 10 posts were lined up very close to one another holding up a few boards of wood that could have been used as a bench. They were directly behing the wooden fence shown in the picture, which is the backyard of a house at the end of Caroline Street. Luckily, a little bit past the fence was an opening that allowed me access to Caroline Street so I did not have to reverse my steps in order to get out of the thorn laden area. And, if I had entered the area at this point, I would have saved my hands from numerous scratches and about 40 mintues worth of walking. Well, I need the exercise anyway and I'm always up for an adventure. 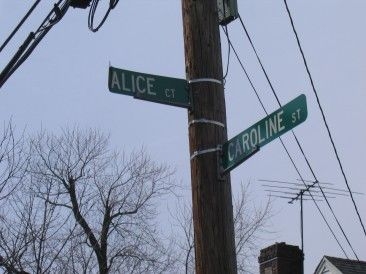 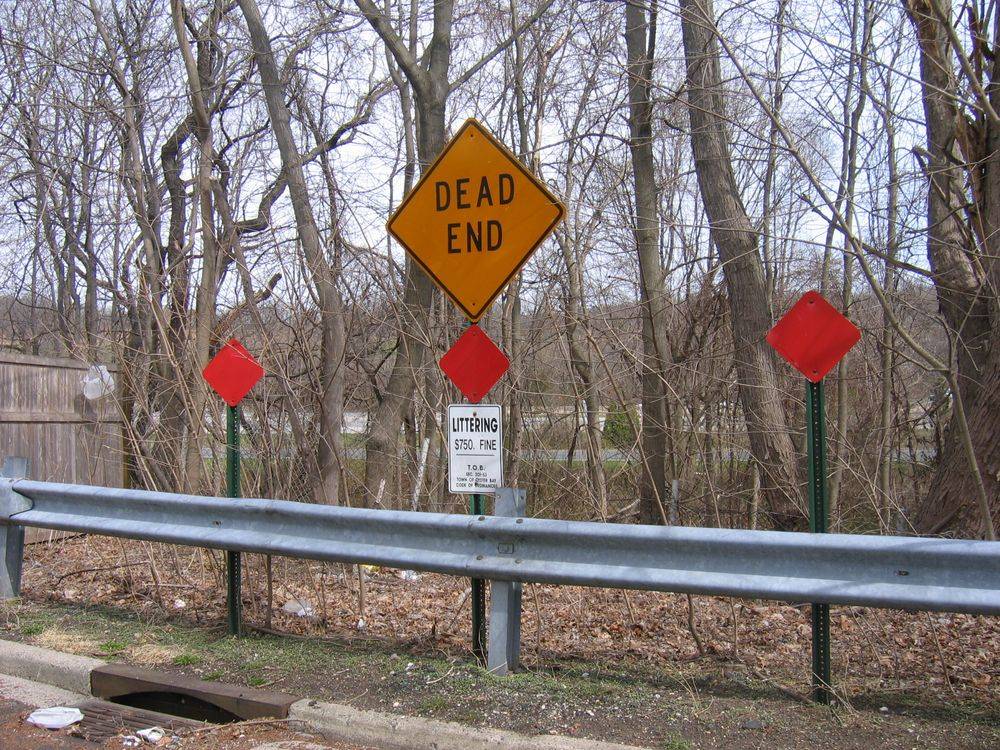 The posts are just a bit north of Caroline Street past the dead end sign and to the left (in back of the wooden fence). A little to the right of the dead end sign is the access point through which if I had started my adventure at would have made it that much easier to find the posts.

This is a shot standing atop the area where the posts are. Basically looking down (east) towards the Seaford Oyster Bay Expressway. In the next picture you're able to see the SOB and the southbound exit for Powell Avenue. 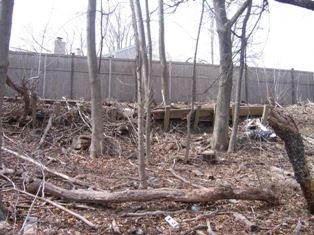 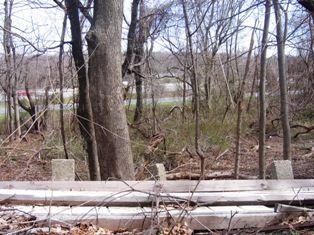 The first picture above is looking east and shows the Seaford Oyster Bay Expresseway and its Powell Avenue exit in the background and and the posts in the foreground. Across the expressway is Bethpage State Park. The other picture is looking west towards the posts - in the center are the posts from with the ones on the right holding up the wooden planks. I took a picture from my moving car while on the Powell Avenue exit ramp and was able to capture the posts but not enough to show here. Its always amazing to me that even though I've travelled Nassau County roads, including the SOB for so many years, never did I know of the existence of these and similar posts and their historical significance.