Researching the Motor Parkway, I often come across interesting tidbits of information that I'll include on this page. This may include photos, maps, anecdotes or just little known facts or fiction about the Parkway's history. Hope you enjoy. Check back every so often to see what's been added and if you have anything I might be interested in, please let me know. I'll certainly acknowledge anything I receive - thanks.

A favorite sport on Long Island during the 1900s was polo. Polo fields were built on the central part of the island and catered to the wealthy who often times got to the games by way of their automobiles and of course the Long Island Motor Parkway. Unfortunately most cars were not equipped with a GPS (factory installed or portable), and thus instructions were given in the newspapers and flyers promoting the event. To determine the accuracy of the following "Best Routes" as compiled by the Automobile Club of America in 1914, I'll program the starting and end points of what's given into a GPS and Mapquest and will let you know the results. I'll also let the Auto Club know if they need to update any future notices about getting to the polo games!

The map named Polo Land was found in the Museum of Polo (not sure of the date) and shows The Motor Parkway running left to right in the middle section of the map, just south of several named polo fields near Westbury and Hicksville. The top players are named and indicated as living within the 4 mile radius of the polo fields. Note the notation at the bottom near Jones Beach that reads "British horses coming on the S.S. Minnetonka". Also the notation at the top "commuting by speedboat" which probably applied to the wealthy businessman of the north shore making their way to NYC. 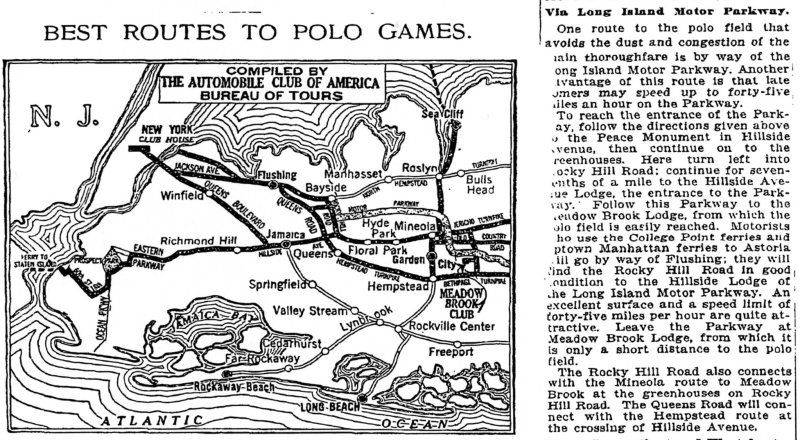 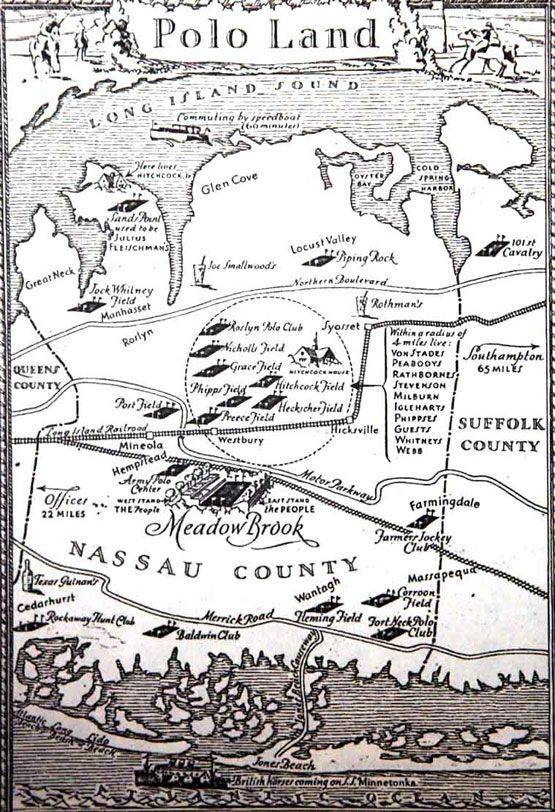 What's In A Name?

What Shall We Do With The Motor Parkway

When the Motor Parkway was deeded over to Queens, Nassau and Suffolk Counties in 1938 for non-payment of taxes, each county determined how it would use the roadway. Queens eventually used it as part of its park system for bicyclists and joggers, Nassau sold most to developers and utilities and Suffolk incorporated part of it into its system of roadways. Of course, much of the roadway has today been developed over as well as being used as roads and by the utilities. I'm not sure where the above 1938 proposed disposition appeared, but it showed five different uses (you can determine how accurate this proved to be by examining the pages in the rest of this website):

The Beau Sejour Hotel in Central Park, LI (today's Bethpage) was a prominent stop for many wealthy travelers on LI. While the building was built in the mid-1850s as a residence, its use as a hotel continued until its closing in 1974 (it was demolished soon after in 1975). I'm not sure of the date of this picture, was is actually one side of an advertising card; the map below is on the other side. The map shows the Beau Sejour in relation to The Motor Parkway and shows that because of its proximity was a logical choice for roadsters to stop as they traveled east or west. Check out the autos of the age in the picture!

Some of the guests who made a stop at some point or another were Edward, Prince of Wales and his bride Wally Simpson, 'Roy' Rainier of Monaco, and His Majesty King Saud of Arabia. Entertainers included Mr. Ziegfield and a bus load of "girls", Enrico Caruso, Arturo Toscannini, Schubert, Sir Cedric Hardwick, Sonia Hennie, Myrna Loy, Rex Harrison, Otto Premminger. Among the 'regulars' were Ralph Belamy, Arthur Godfrey, Alan King, Don Vorhees. Other guests from the world of politics, business and sports included Harry Truman, General George Marshall, a very young John F. Kennedy climbing an apple tree, Mr. Honer (harmonica), Schlemmer of Hammacher and Schlemmer, Armour (meats), Trommer (beer), O'Malley and Shea (baseball), Roy Cohn and Mayors Jimmy Walker and Robert Wagner to round off the list.

Thank you to Donald Wilson and his web page for the above information: http://reocities.com/CollegePark/1827/lihisdw.html 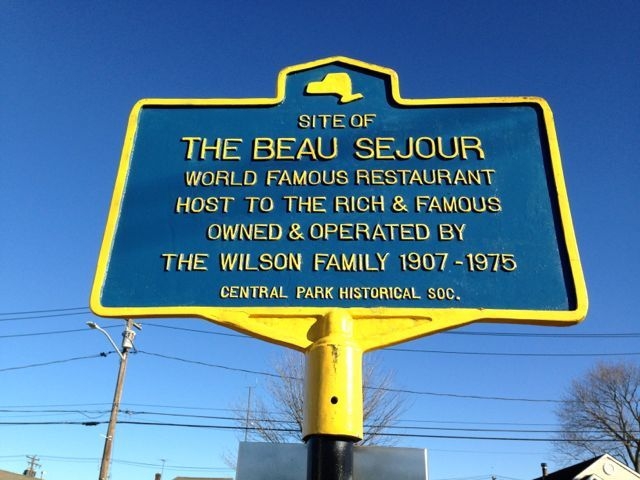 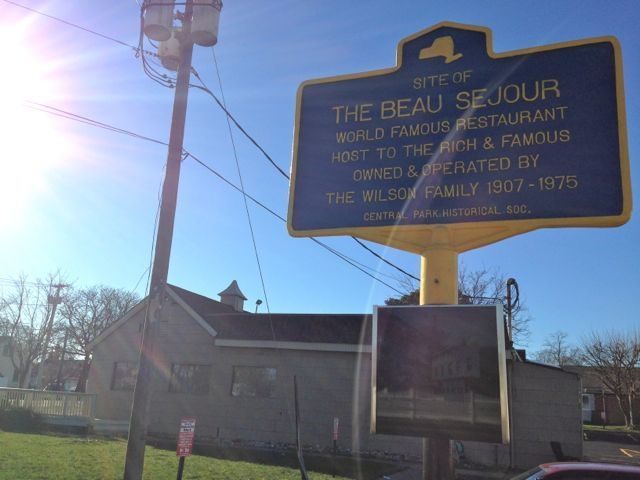 The Red Lion Inn, a hotel and restaurant was located on what is now the Long Island Expressway North Service Road, east of Lakeville Road. The Red Lion Inn had previously been the Elverton Inn, and a general store before that. This inn served tourists visiting the Lake Success area, and travelers on the Long Island Motor Parkway. It was destroyed by fire in 1935.

This is a map for the Rudkins' of Hempstead showing the Motor Parkway, Roosevelt Field (the airfield, not the shopping center), Roosevelt Raceway, Mitchell Field, the Meadowbrook Club and other features of mid-Nassau County. I'm not sure if it was used to promote a store or restaurant or just was used to direct people to the Rudkins' home. My opinion is the latter.

Interesting 1932 map of Long Island showing 9 points of interest and the Motor Parkway. Indicates it is part of a portfolio of aerial photos by Captain Alfred G. Buckham, "of the world's most fashionable island - together with a map clearly indicating the site of each exposure".